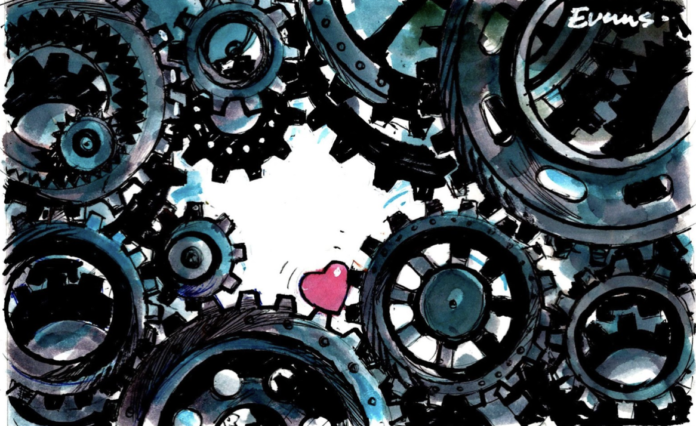 The dramatic events of the past week, when a popular prime minister elected by a record majority, was attacked by evil that forced him to resign, is a symptom of our flawed “democratic” system. A program which, by its unusual nature, made such an outcome completely predictable

Back in 1972, when the newly elected Labor government’s election slogan was “Time for a Change”, NZ Herald cartoonist Minhinnick greeted the result with a cartoon satirically rearranging the words to read “Change the Times.” And given the nature of our political system, no matter how disdainful his cartoon was of the voters’ decision, the cartoonist was absolutely right – “it was a temporary change” – and isn’t that our problem?

How can we be sure that given the opportunity every three years to choose between opposing political views, it is possible that everything done by one can be finished by the other, as it is the definition of “democracy” and the only way to a better tomorrow?

Is that really the best we can do?

The poor excuses for the policy that Lincoln presented in his Gettysburg Address; “Government of the people, of the people by the people”, our democracy is a sham.

Based on our blind trust in a false story, we are victims of what Gramsci called “Cultural hegemony”, where the self-understanding of a society is subtly “Invented”, to make us believe that its “view of the world” is it. and only, and thus becomes the accepted norm.

Similarly, Noam Chomsky, one of the greatest political thinkers of our time, has described our society as having long been victim to a pervasive propaganda model designed to produce our “Manufactured Consent” so that we continue to wear the chains that bind us, without realizing it. for what they are.

Perhaps people are starting to question the system that, in order to work, requires us to eat other people, the system that says that in order for some to profit, many must lose. Like a system where, due to the lack of manufacturing industry, the necessities of life themselves have become the barter that our economy depends on to function.

That is Feudalism – the system that prevailed when we were ruled by “nobles”, and our ancestors fled here to escape. (The fact that we then applied that method to the people we found here is another story)

As the expression “gentlemen of the world” suggests, people in those days were defined as those who had property and those who did not – and isn’t that what it will define us today? We actually eat them to survive – a process that by its very nature increases the gap between the haves and the have-nots, and drives us further into the greatest disaster.

Another way to explain how our programs work is to say that we are eating our children’s future.

Whatever it is, there has to be a better and more important way to find that “Better Way” it has to be a frank and unbiased discussion about the purpose of society, an idea that the infamous Margaret Thatcher, one of the founders of neo-liberalism, said it does not. ‘I’m here.

Suffice it to say, we need to address the worst effects of our current system, which, as many posts by Dr. Susan St John at TDB makes it very clear, it is poverty that is ever increasing.

But how do we do that?

How do we set up a plan to feed our children’s future?

We believe that every politician’s time at work depends on solving the problem, not just paying lip service.

But how do we do that?

Give every child a vote!

Demeny’s voting is named after it anthropologist Paul Demeny, who came up with the idea in 1986. Demeny said children “should not be left disenfranchised for about 18 years and that custodial parents should exercise the children’s voting rights until they are adults”. Demeny’s motivation behind proposing such a plan was to make the political system able to deal with the plight of those who were most affected by it, but who had no voice. Read more about it here;

Just imagine. Soon people, many with large families, who are, almost by definition, the biggest victims of the system, will have real power at the ballot box, instead of, under the current system, cheating them.

Suddenly our poor communities will see changes being made and those who are currently benefiting at their expense will have to find other, more productive, ways to provide for the lifestyles they are used to.

However, since politicians will participate in deciding whether such a plan has been considered, and given the “cultural hegemony” previously described The Establishment is more than “definitions, ideological values ​​and much more”, it will not happen.

In the meantime, we have lost someone who, despite being a part of the show, deserved better than the evil that was done to them.